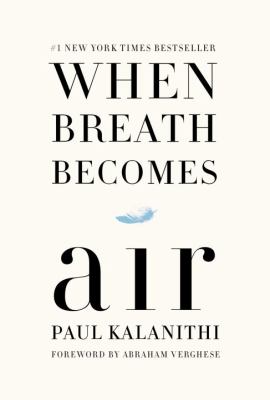 Neurosurgeon Paul Kalanithi was only 36 years old when he was diagnosed with stage IV lung cancer and then a rare form of brain cancer. Suddenly he went from doctor to patient, struggling to find his identity in the face of death. This is recommended for fans of Atul Gawande’s “Being Mortal,” and told from the dying patient’s point of view.

Everything Paul and his wife worked so hard for, the decade spent training to become a doctor, his medical research and his future teaching plans – were put on hold because of his treatment plan. He and his wife’s decision to have a child during this difficult time made me tear up. When his wife said, “Don’t you think that saying goodbye to a child would make your death more painful?” And he replied, “Wouldn’t it be great if it did?”

Paul has a lyrical way of writing, referencing literature and poetry that was meaningful to him throughout the book. Keep your tissues nearby when you read this moving and heartbreaking memoir that was completed by his wife after his death.