The Best Kind of People by Zoe Whittall 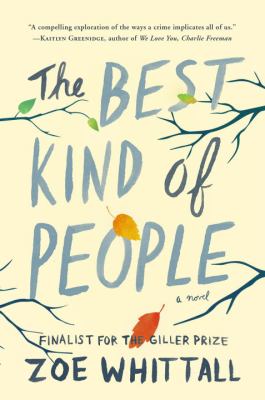 How would you react if your father or husband was accused of sexual misconduct toward young girls in his charge? George Woodbury, a beloved teacher, local hero, and old money WASP, is accused of inappropriate behavior on a ski trip with students.

The novel focuses on how his family copes with the news. Daughter Sadie moves in with her boyfriend, and finds herself involved with and used by his mother’s boyfriend, a writer. Wife Joan seeks help with a support group of women whose men are in jail for similar crimes. Son Andrew, an attorney who fled the little town in Connecticut for New York, pulls away from his longtime partner.

The strength of the book to me was that the reader doesn’t know if George is guilty or innocent until near the end. The book is weakened by the ridiculous “men’s rights” group in town. I enjoyed the book and the characters, particularly daughter Sadie, who grows and changes in the course of the novel.