Thanks a Thousand: A Gratitude Journey by A.J. Jacobs 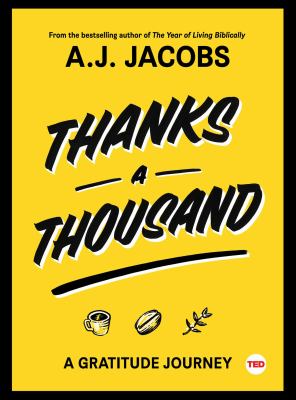 This is an expanded book based on the TED Talk Jacobs gave in June 2018. It started simply: Jacobs wanted to thank every person involved in producing his cup of coffee. What he learned is that coffee – and nearly every item we use every day – would not be possible without the efforts of hundreds of people around the world. From the trucker who drives the beans, to the designer who created the coffee shop logo, to the engineer who created the cardboard sleeve (known as a zarf), to the farmers in Colombia who harvest the coffee cherries.

What he learns is a lesson of being grateful on his “Gratitude Trail.” He encourages others to focus on the thanking those around us, and being mindful of the interconnectedness of the world in which we live. This is a quick read, meant to be read in a sitting or two, and is the perfect accompaniment to his TED Talk.