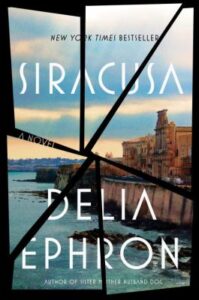 The vacation from hell. Two couples travel to Italy together, along with one couple’s 11 year old daughter. Michael, a blocked novelist with a mistress back in NYC, and his wife, Lizzie, an underemployed journalist join Lizzie’s old boyfriend Finn, a restaurant owner from Maine and his pretentious wife, Taylor, along with their pathologically shy daughter, Snow. What could go wrong? Taylor hates Siracusa, a town in Sicily, for its lack of a 5-star hotel. Michael is obsessed with getting in touch with his mistress, a waitress back home. Lizzie and Finn flirt obsessively. Then Kath, the mistress, shows up in Siracusa. I listened to this book, and I have to say I enjoyed it, although there isn’t a likable character to be found. Ephron skewers intellectual and class pretensions, smother-mothers and boys who never grow up.