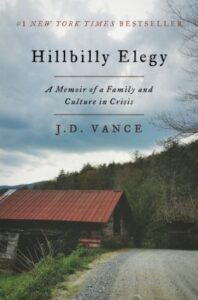 Vance is a former Marine and Yale graduate who talks about growing up in a poor, white working-class family in the Rust Belt of the Appalachia region. Vance shares his family’s struggles, which includes abuse, alcoholism and extreme poverty. This is a memoir about the loss of the American Dream and has striking parallels to the election even though it was written a year ago.