Do Humankind’s Best Day’s Lie Ahead? The Munk Debates by Steven Pinker and Matt Ridley vs. Alain De Botton and Malcolm Gladwell 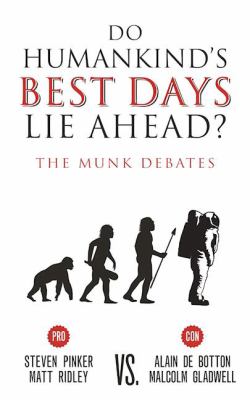 An interesting debate between four leading public intellectuals from different fields of study. So who makes better sense of the world, Pollyanna-ish believers of scientific and technological progress or the Cassandra-ish hand-wringers and moral navel gazers?

Most of the debate feels like they’re talking past each other, with the pro side showcasing empirical scientific measurements and the con side, addressing the philosophical problems inherent in the humanities. Sadly, the study of the humanities always comes off as First-World-ish in their concerns. Is it equivalent to say the world is better off, knowing we’ve eradicated diseases that lead to high child-mortality rates; but we’re unhappier because people mock our contrived and boorish social media obsessed lives? Progress brings with its own set of problems, but does that discount the net positive of moving forward?

The Con authors underscore how progress is not panacea, that there are consequences that lead to existential crises. The Pro underscore growing prosperity and less inequality than at any point in human history – and the trajectory of improvements is only accelerating. Ultimately, no one knows the future – neither the problems that will exist AND the fixes available to us. Intractable problems of today might appear laughable to a society that has advanced at 10 times the rate of innovation, it becomes difficult to conceive of the solutions at our disposal.

In the same manner that we could not foretell nor deemed necessary the smartphone; it has in a relatively short period, proven itself essential and has serious global ramifications – both in solving many of our problems and initiating new ones. A fascinating debate from evenly matched participants.