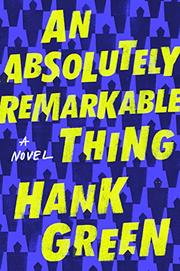 Hank Green is the younger brother of best-selling author John Green and a YouTube vlogger. This is his first book and it’s a great debut; I read it in one day.

Graphic artist April May was working late one night when she encountered a strange armored Transformer-like figure on a Manhattan street. She calls her videographer friend Andy and they create a silly YouTube video in which she names the statue “Carl.” What they don’t realize is the Carls have been appearing all over the world, and no one knows why.

By solving some puzzles with a little bit of music trivia and science knowledge, the duo become instantly internet famous and their videos are going viral. April and Andy realize everyone around them is having the same dream, a puzzle sequence that just begs to be solved. By using social media and chat rooms, people from all over the world come together to solve the cyphers, all while facing threats from a group of detractors who believe the figures are alien beings who intend to destroy the human race.

This is a fun adventure story that invites readers to question politics, social media, friendship and the supernatural with a wonderful cliffhanger.