Hit Makers: The Science of Popularity in an Age of Distraction by Derek Thompson 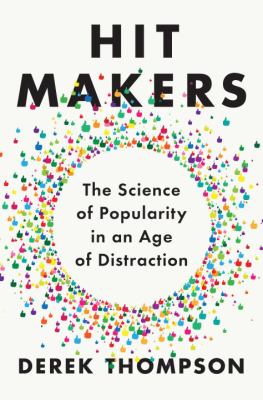 Derek Thompson tackles the chicken/egg problem of why certain objects capture our aesthetic attention, even when qualitatively better competitors fall by the wayside. Thompson argues that the meritocracy of popularity has little to do with what’s best. Content is secondary to the means of distribution. We mistakenly attribute popularity as an intrinsic quality, failing to recognize how exposure (the mere exposure theory of continuously being seen) can imbue popularity. The book explores decision theory, economics, and experiential marketing as an explanation of why the unremarkable remains popular, why we favor things that strike us as oddly familiar, why a name like Ethel is passe and falls out of favor, but old names like Emily remains timeless.

Once the gate-keepers of popular taste, traditional media distributors are losing ground to social media. Our preferences are no longer a solitary decision. We are constantly looking to others as influence; shifting the perceptions that make or break popularity. Our desire to appear cultured, means repeated validation through social confirmation. As Thompson notes, we seek to be unique but only so far that we remain acceptable within the group. Popularity of objects and things is endlessly fascinating, because they underscore choices that hint at our aspirational desires. Thompson says people want the things they care about to say something meaningful about them – which is why social media, at its root, are people talking about themselves. It’s the economics of self-expression. Popular objects confer status, along with a shared identity. Popularity is the ready-made means of broadcasting an internal sentiment (I bought “X” because it’s “Me”).

Thompson delves into this irony; that people feel most like an individual when they crystallize their beliefs in the effort to fit into the group. He examines how the medium not only alters the message, but also the messenger. Social media makes us airbrush our life of any flaws. We find ourselves crafting our message to cater to an audience that wants to find us interesting but not necessarily human. And if you tire of the nauseating pit of self-love that is social media, Thompson brilliantly contrasts the vanity of our manufactured personas with the popularity of ranked Google searches – late night questions of insecurities and self-loathing that make up the overwhelming number of search inquiries done in private. Derek Thompson’s book is a fascinating read into our decision-making.